The UK City of Culture 2021, this West Midlands city was an important settlement throughout history, despite having been granted a city status only during the medieval period. Coventry lies on the River Sherbourne—now largely hidden by infrastructure and only glimpsed in modern canals—and boasts a population of some 312,000 people, with a healthy 62,000 student cohort from University of Warwick (Coventry historically belonged to Warwickshire, rather than West Midlands) and Coventry University. Students say that because their numbers are relatively large, they are never short of new mates and friendly faces to meet up with for a chat, pint or a meal in Coventry’s many cafes, pubs, and restaurants.

UW and CU students have access to some 23 halls of residence, many of which are private and run by the nation’s top operators. Some were opened just last year, and one is opening just now in 2021! If you’re on the market for a lovely, fresh and un-lived-in rooms and studios or well established, reputable halls you are in the right place. The city has two major concentrations of halls, a result of the two distinct locations of the local universities. The majority of halls are located in the city centre, generally within the confines of A4053 ring road, though there are some notable exceptions just outside of it. This location is particularly suited to CU students who enjoy being close to their uni—the campus is situated in the eastern part of the city centre, bordering the A4053 and B4544. You will thank yourself for choosing a private hall so close to your uni buildings when you are running late for that Monday 9am lecture or a seminar—with some halls being just below 100yds away from CU, you’ll even have time to grab a refreshing cup of coffee or tea on your way! Being in the city centre is also largely beneficial to social life, as this is where all the best pubs, restaurants and clubs are located, as well as gyms (for the health-conscious) and branches of the major supermarket chains (who likes to carry their weekly shopping far?). The other major concentration of halls is around University of Warwick, itself situated some 2.6m south-west of the city centre. We recommend that only students reading at UW settle here, as the location would not really benefit CU students whom we and the university encourage to settle as close to their campus as possible. UW students may not have the hustle and bustle of the city centre, as their area is a quieter, more suburban one. Students tend to highlight the large number of accessible green spaces for leisure and recreation, perfect for picnicking, jogging, cycling or even working out in the fresh Midlands air. Shopping for groceries is not a problem thanks to Cannon Park Shopping Centre, while good bus and train links ensure that you will always be within reach of a fantastic night out. Thanks to its central location within England, Coventry’s students are in an enviable position allowing them to visit nearly all parts of the country via train or bus in a short matter of hours. Birmingham, or even London are among popular weekend getaway destinations for students longing for that big-city vibe party.

Choosing a new, student home is often stressful and overwhelming. Settling in a private hall of residence is always a comfortable, easy option—especially so if you spent your first year in uni halls. If you want to save time and nerves looking through offers of various providers, make sure to start your search on studenthalls.co.uk. We collect all the best options in one place allowing you to compare prices, see high-quality pictures of the properties and apply any filters you may need. Choose easy renting, choose studenthalls.co.uk. 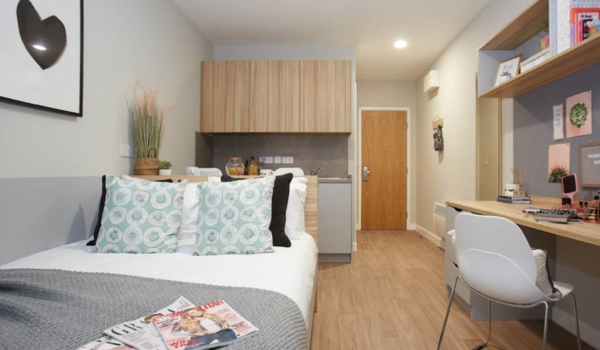 Coming to Coventry in September 2020, Gulson Gardens offers spacious en-suite rooms and stylish studios. Each room comes with a comfy small double bed, en-suite shower, loads of storage and plenty of workspace. Enjoy all the perks of what this city has to offer, with the city centre only a stone’s throw away and you’re only minutes from Coventry University. 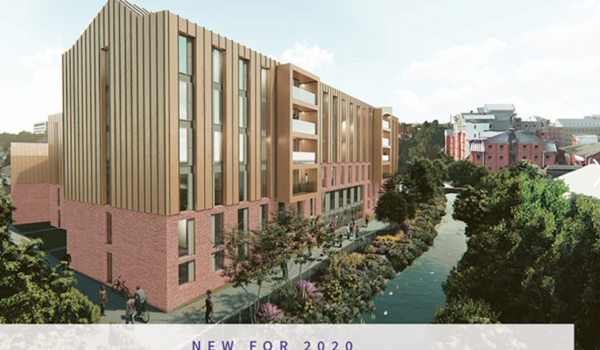 The Engine Room is our brand spanking new student accommodation in Coventry, which is launching September 2020 – we’re very excited! It’s our second property in Coventry so you’ll already be part of an amazing community. A very short walk from Coventry University campus, the city’s main shops, and the major bus routes to Warwick University (well, that’s handy). 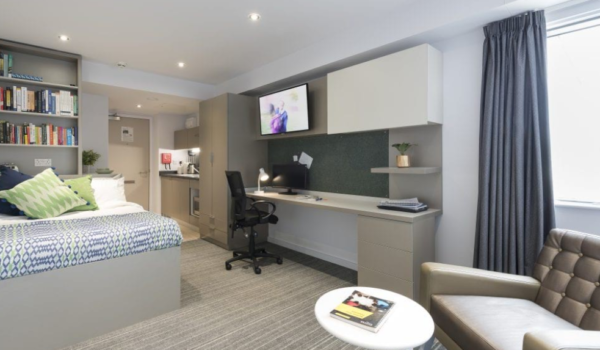 City Point is Downing Students second student hall in Coventry, located in the heart of the Belgrade Plaza area of Coventry city centre and close by to the popular City Village. 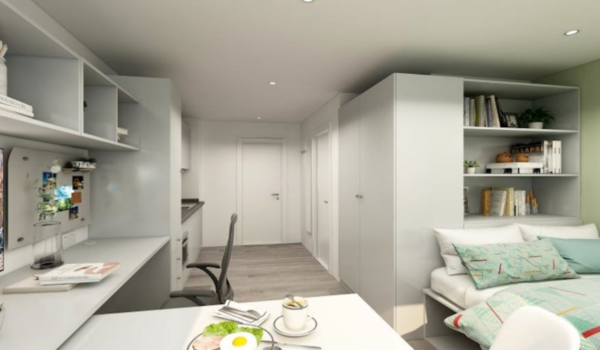 Be among the first to stay with us in UNINN Infinity – the brand new building in Coventry opening in Sep 2020. Upon finishing, it will be the tallest building in Coventry and the city’s new landmark. Enjoy the stunning panoramic view of the city from your room with full-length windows. 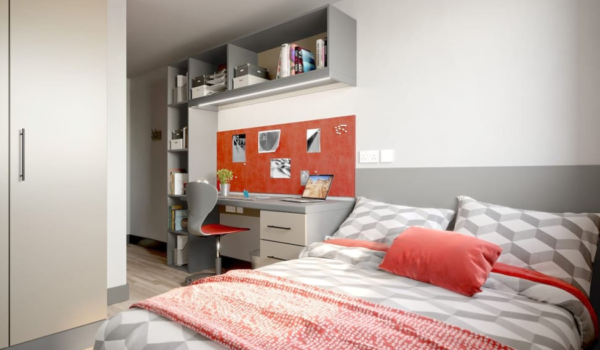 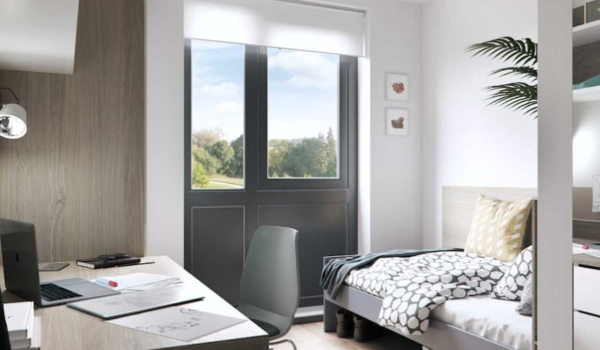 Brand new for 2020, Eden Square offers a fantastic standard of student accommodation in the city of Coventry. Close to Coventry University and only a 15 minute walk from the city centre, you’ll have access to explore all that the city has to offer. 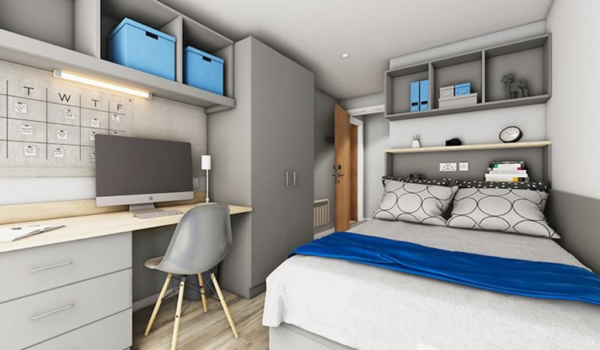 Weaver Place includes laundry facilities, an onsite gym, games room and large social spaces. Residents can also make the most of their student home with regular social events on site.

Merlin Point is a well-designed student accommodation available since September 2016.
It is an ideal place for students from both Coventry University and University of Warwick.

Elegant new property 33 Parkside provides a sophisticated environment in which to live. Relax in our spacious social areas, including a stunning private cinema room and fitness suite, unwind on the exclusive roof terrace and in the landscaped courtyards, or work until your heart’s content in our modern study spaces. This brand new propety sets a new standard in exclusive student living that you shouldn’t miss out on!

This prestigious accommodation will appeal to students looking for an unrivalled luxury living experience in a prime location.

Lynden House offers students at Coventry or Warwick Universities en-suite rooms in 3-8 bed cluster flats. There are 62 beds in this student accommodation providing a mix of single and premium en-suite rooms, and it has a bike shed for you to securely store your bike. It will take you 18 minutes to walk to Coventry University or just 9 minutes by bus.

Paradise Student Village is ideal for students at Coventry & Warwick University. The main Priory Campus, the Alan Berry building, the library and the Student’s Union are a couple of minutes walk away. The Techno Centre is next door to the property. Coventry city centre is close by and the train station is only a 10 minute walk.

Newcomers to Warwick University will be welcomed with open arms at Warwick Student Village. It is a central hub for students of all disciplines, offering a modern, stylish home with all the trimmings you’d expect these days, with everything you need right on your doorstep, from amenities to entertainment and leisure. All of that, with the Universities just a short hop away via bike or public transport from your student accommodation in Warwick.

Be part of the newest student accommodation Coventry has to offer and be the first to experience the amazing Trinity View. Set to become one of the most iconic developments in the city this new 614 bed scheme has been created to bring the latest in modern city living to students who want to be in the heart of the city and the University life. The six new residential blocks surround a private landscaped courtyard to make a great place to socialise and work. 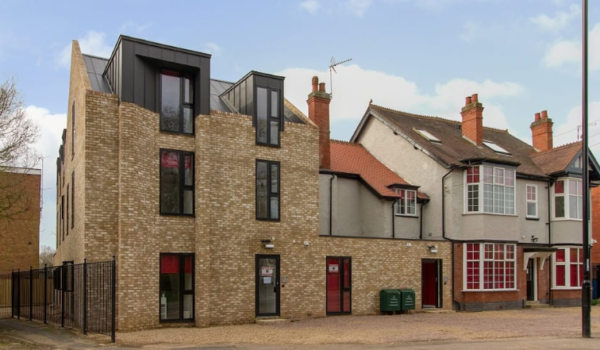 Broad Lane House is the newest development from AXO Student Living. It is a high specification development of en-suite and non-en-suite rooms, with lovely communal spaces.

Sherbourne Student Village is ideally situated for students at Coventry University with the main Priory Campus, the Alan Berry building, Library and the Students Union just a 15-minute walk away. 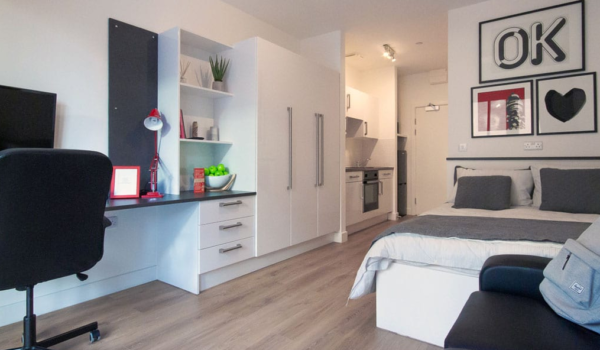 We’ve been named the Best Small Provider 2019 at the National Student Housing Awards – judged 100% on direct feedback from students. It’s the fourth time we’ve been voted best in the country.

Apollo House is a well established and popular student hall of residence in the well regarded Earlsdon area of Coventry where there are many local shops, supermarkets and other facilities to cater for students everyday needs and is only a few minutes walk from the Coventry University campus.

Just a short walk to Coventry University and all the shops and nightlife, you can experience the best Coventry has to offer living at City Village. As part of the Belgrade Plaza development, you have direct access to Pizza Express, Café Rouge, Bella Italia, and Belgrade Theatre all on your doorstep.

Mercia Lodge offers excellent student accommodation situated in the heart of Coventry city centre, set just a few minutes’ walk from Coventry University campus and under 15 minutes’ drive from Warwick University, you’ll never be late for a lecture. Step out of the accommodation and you’ll find a wealth of shops, restaurants, cultural attractions and amenities, as well as superb transport links.